The Waterboys: "Where the Action Is"

In the 38 years Mike Scott has led the Waterboys, he’s taken this Scots band in various musical directions while maintaining its distinctive identity. Scott has remained the only constant through many changes of personnel, so it’s really his musical vision that remains at its core. He injected stomping rock’n’roll into Modern Blues (2015), and on the two-disc Out of All This Blue (2017) Scott gave in to his love of R&B, blues, and soul. On Where the Action Is those strains are joined to hints of the group’s signature Celtic folk-rock.

The title track, which begins the album, is a reworking of “Let’s Go Baby (Where the Action Is),” the B-side of soul singer Robert Parker’s 1966 hit single “Barefootin’.” Scott and Paul Brown, the Waterboys’ keyboardist, have added new lyrics and given it a more pronounced rock’n’roll flavor. Brown’s Hammond organ drives the track with a strong assist from Scott’s stinging guitar and Ralph Salmins’s hard-hitting drums. At the end, backing vocals from Jess Kavanagh and Zeenie Summers add a gospel flavor.

“London Mick” celebrates the Clash’s Mick Jones with loud guitars and a big rock’n’roll heart -- in my favorite line, Scott recalls watching, with Jones, the 1984 mockumentary This Is Spinal Tap. Then it’s back to soul with “Out of All this Blue” -- the song didn’t appear on the album of that title -- Brown’s horn playing and Hammond organ providing the grease. “Take Me There I Will Follow You” takes a run at hip-hop, combining it with a happy pop chorus in a fun, fresh mashup.

“In My Time on Earth,” its arrangement based on acoustic guitar, is an emotionally direct and moving look at cultural change and current events that’s angry without preaching. Brown’s Hammond and synthesized strings create a moody backdrop for Scott’s voice, and as the track grows in intensity, the voices of Kavanaugh and Summers support Scott in putting across its powerful message. Steve Wickham’s fiddle in the closing moments evokes memories of earlier Waterboys records. 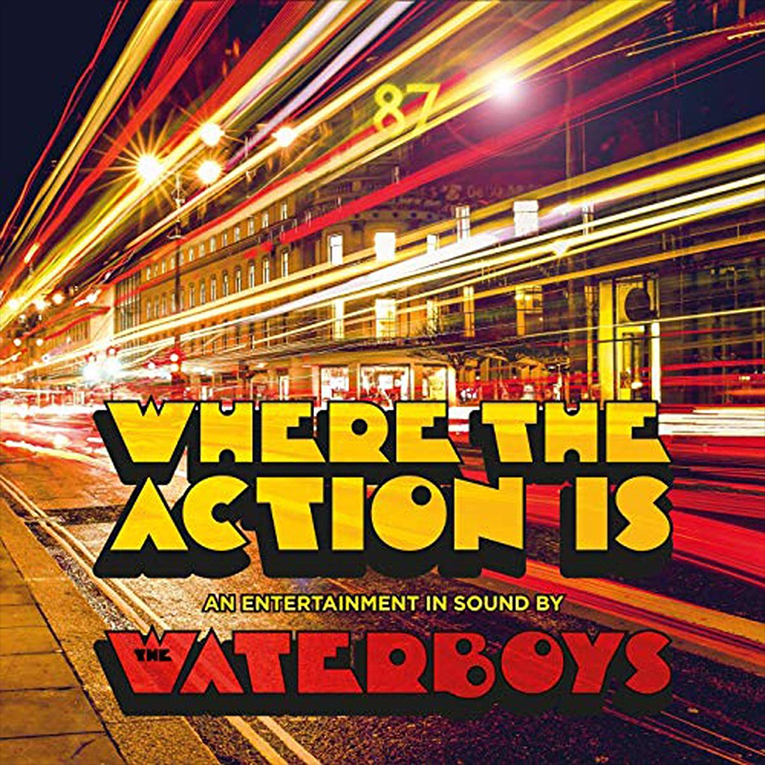 The strongest echo of the Waterboys’ past is heard in “Then She Made the Lasses-O,” a Robert Burns poem set to music by Scott, who adds to the mix the surface noise of a worn LP -- that, and Wickham’s fiddle, summon memories of Scott’s and his country’s pasts. In “Piper at the Gates of Dawn,” which shares its title with that of a chapter of Kenneth Grahame’s The Wind in the Willows (1908), Scott recites passages from the novel, accompanied mostly by a simple piano line. At more than nine minutes, this track could easily have been too long, but Scott’s impassioned reading of Grahame’s spiritual and pastoral images is mesmerizing.

Nostalgia may pervade Where the Action Is, but the album is more a celebration of where Scott’s experiences have led him than a longing to return to any age of gold. In “Ladbroke Grove Symphony” he recalls a period, in the 1980s, when he lived and wrote in London’s West End -- a time he fondly remembers but realizes he can’t go back to: “Some things I guess / You ain’t meant to repeat.” The album sometimes looks back sadly, but ultimately feels hopeful, even defiant.

The sound of the title track is appropriately dense, with layers of instruments and effects; other songs get more space, through which details surface. Voices are nicely focused and full-bodied, and Aongus Ralston’s bass guitar has lots of punch without being overemphasized.

I don’t know if Scott felt a catch in his throat as he sang those words in “In My Time on Earth,” but I choked up a bit when I heard them -- they capture how many of us feel as our musical heroes fade away. He follows that verse with a suggestion: “So let’s tell it like it is, man / let’s nail it on the line.” Mike Scott and this band have been doing that for 38 years. Let’s hope they get 38 more.