According to a note on his website, Bruce Springsteen’s new album, Western Stars, was inspired by “the Southern California pop records of the late ’60s and early ’70s.” Echoes of Glen Campbell’s late-’60s hits “Wichita Lineman” and “By the Time I Get to Phoenix,” both by songwriter Jimmy Webb and both recorded in Hollywood, run through the album, along with Burt Bacharach’s productions of that period. Many Springsteen records have had layers of instrumental detail, but Western Stars is, by any measure, his most lavish.

The album begins simply enough. In the first two verses of “Hitch Hikin’,” Springsteen sings about rambling, “Thumb stuck out as I go,” accompanying himself on banjo, as well as on a glockenspiel mixed low in the right channel. At the end of the second verse, an expansive string arrangement widens the song’s sonic scope. In five verses, Springsteen’s narrator introduces us to people he meets in his travels. Lyrically, “Hitch Hikin’” wouldn’t be out of place on other Springsteen albums, but the arrangement suggests the endless vistas and wide open spaces of the West.

“The Wayfarer” shows how much from those late-’60s productions Springsteen has absorbed. The way David Sancious’s acoustic piano plays against Springsteen’s acoustic guitar already marks something of a departure from the songwriter’s usual approach, but as first the strings enter, then vibes, horns, assorted keyboards, and percussion, a rich, stirring backdrop is created for Springsteen’s voice. This song and “Tucson Train,” another beautifully presented track, show Webb’s influence in their engaging melodies, but it’s Springsteen’s own songwriting voice that defines and gives them shape. 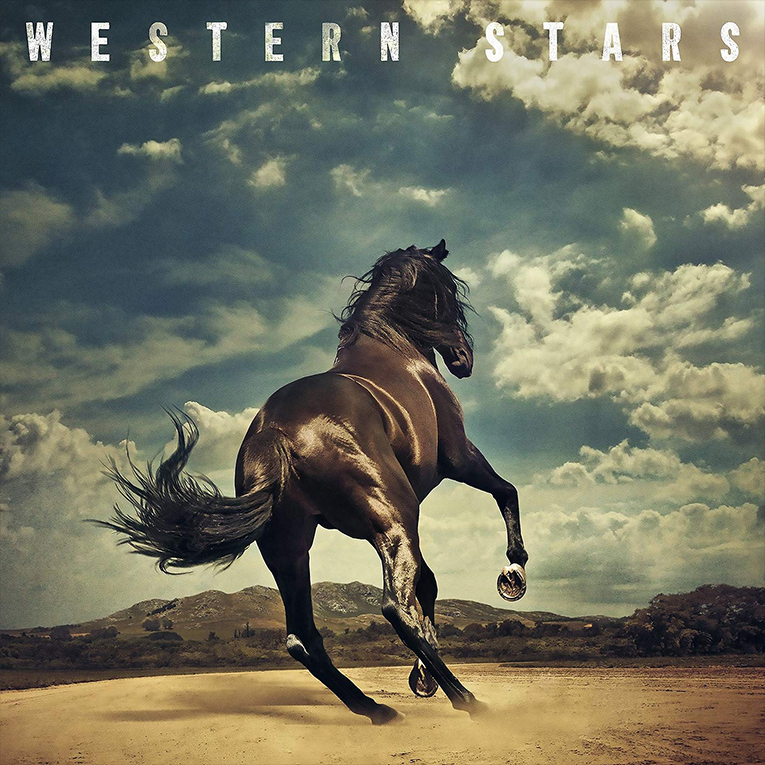 The title track and “Drive Fast (The Stuntman)” are about people working on the fringes of the film industry. The central characters of both songs are long-timers who carve out small roles in a world that rewards others far more. The narrator of “Western Stars” cadges drinks by telling stories of the time he appeared in a movie with John Wayne, and the stuntman has “two pins in my ankle and a broken collarbone.” What gains they’ve made are small and fleeting, and if their lives aren’t as grim as the blue-collar grunts who are often the subjects of Springsteen songs, they’ve still fallen far short of their dreams.

In “Sundown” Springsteen sings of loneliness, in “Hello Sunshine” of finding happiness when life pulls in the opposite direction, and in “Tucson Train” of meeting an old love at the station. Western Stars contrasts the possibilities contained in the West’s big skies and sunlight with the realities of living day to day, and the arrangements, opulent as they are, help illustrate those paradoxes.

The changes in style and setting seem to have given Springsteen permission to lighten up a bit. Each of his albums since The Rising (2002) has suggested that this singer-songwriter felt a responsibility to be a spokesperson for the downtrodden, a duty he didn’t wear lightly. On Western Stars he sounds more relaxed than he has in at least those 17 years, and he drops, for the most part, the Woody Guthrie-esque phrasing he’s sometimes used on recent recordings. 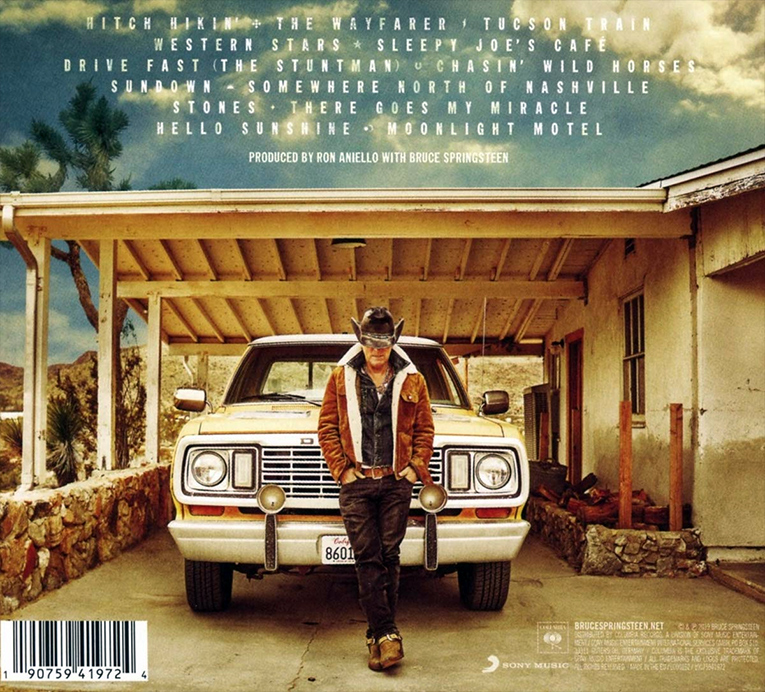 While the use of strings on so many of these tracks might suggest formality, the music feels more alive and flowing than on any Springsteen album since The Rising. This is the third album Springsteen has coproduced with Ron Aniello (who also plays a dozen instruments here, and sings in the background), but while Wrecking Ball (2012) and High Hopes (2014) were overstuffed and compressed, on Western Stars each instrument is given enough space to register clearly. Although these arrangements are packed with small touches that make the disc a pleasure to return to, the music never feels too dense.

Bruce Springsteen grew up in the glory days of AM radio and, like many of his generation, absorbed a variety of the musical styles he heard. One of his great heroes is Roy Orbison, whose recordings often featured lush string arrangements, so it’s not surprising that Springsteen has at last allowed himself to be pulled a bit in that direction. This album has the openness to music’s possibilities and the sense of experimentation that made his first records, from the early 1970s, so exciting. I wouldn’t want every Springsteen album from now on to sound like Western Stars, but I hope it marks a return to his making music for the sheer joy of it.